Agility (or why the best of intentions can fail miserably) 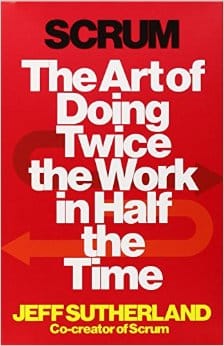 Perhaps the most popular version of the agile methodology is Scrum. And co-creator Jeff Sutherland just published a book on it to take agile to the mainstream. It’s called Scrum: The Art of Doing Twice the Work in Half the Time.

It’s rated 4.5 stars. Not bad at all. But what I found most interesting was the first, most helpful review…

It’s so telling because installing Scrum is like installing any kind of social system (which I define as a framework of prescribed language, protocols and meetings). And that means it comes down to culture.

A social system won’t take unless people opt-in. And if they do opt-in, they need to have choice as to how it’s implemented. It’s that simple, and yet so many companies mandate agile, scrum, holacracy, lean startup, etc.

When it’s mandated, people get anxious. And that can torpedo the best of intentions.

Martin Fowler, signatory of the Agile Manifesto said, “I would rather have a team work in a non-agile manner they chose themselves than have my favorite agile practices imposed on them.” His blog post continues to say, “I hope I’ve made it clear that imposing agile methods is a very red flag.”

Nothing succeeds like success. Let that prove it, rather than strong-arming, coercion, or even selling and “buy-in.”

I’ll be writing more about it as I’ve found nothing more powerful when it comes to culture transformation.