What I learned about culture from stand-up comedy

I recently wrote about taking a 3 month class in stand up comedy (link here). Since then I performed in a club, and the video is below (note: It’s all about dating, and I use two or three swear words).

Here is what I learned in regards to culture:

Feedback loops are always at play
Once feedback loops start they get momentum. With an audience they quickly determine if they like you, and if they do, they are open to laugh. If they don’t, they shut down and it’s much harder to bring them back.

The same can be said of culture. That first interview, meeting, phone call – can make or break anything and how you start those conversations are critical. In the Culture Blueprint I share a template for that first conversation with an employee.

Energy is everything
Culture is a feeling, and whatever feeling you bring with you has a big impact on the room. So what we do before we enter the room makes the difference. On this particular night I was really excited because my friends were there and I got there early to connect with other comics. By the time I hit the stage it felt like I had warmed up for the game.

What do you before you perform at your work?  How do you take care of yourself outside the office? It has a big impact when you arrive.

There are formulas and frameworks to success
The first times I bombed it was because I had no real appreciation for the rhythm of comedy. But even long stories that keep you laughing use a series of set-ups, adding in context, delivering a punch and then adding bits called tags. Here’s a graphic I created to illustrate it. 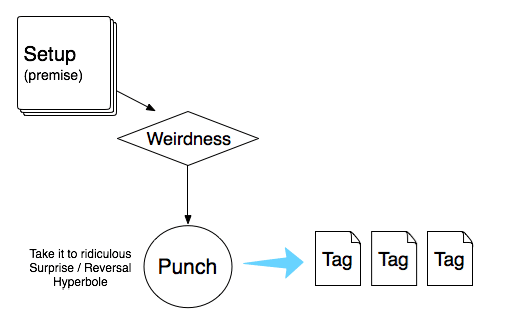 Recognizing systems and flow has had a huge impact on my work.  I use frameworks and models such as open-space that allow cultures to self-organize and scale the business (all while having a lot of fun).

PS – As a result of this work, I am expanding my offerings to include an MC role for events, as well as hosting live conversations on stage.