Many people say you cannot describe Burning Man.  That it’s impossible to know without experiencing it. And it’s true, because each person’s experience is so completely different and somehow magically perfect.  But let me do my best to bring you in…

Burning Man is where a totally barren desert (imagine the flat brown lands where they break the land speed record)…is transformed into a city of 50,000 people: 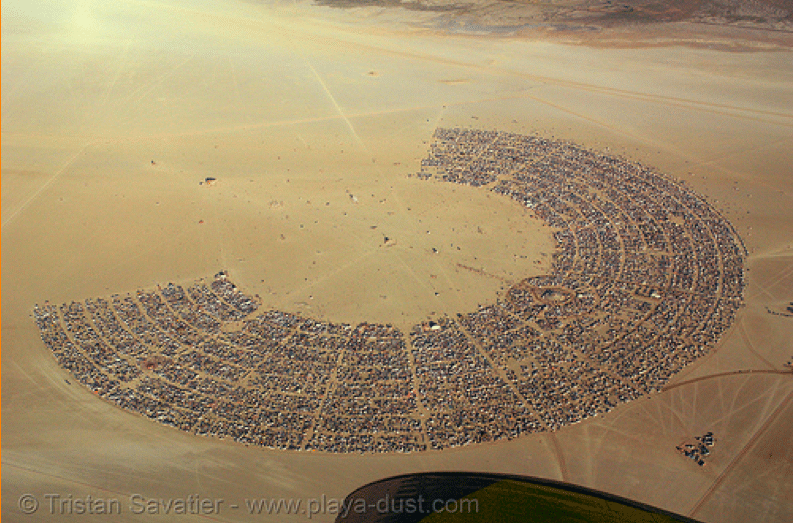 But before we go into the city, let’s take a step back…

Burning Man is an “experiment in temporary community” where people gather to live in radical self-reliance (all they provide are porta-potties). People live life as art, completely expressing themselves as living performances through music, dance, installations, and experiments. 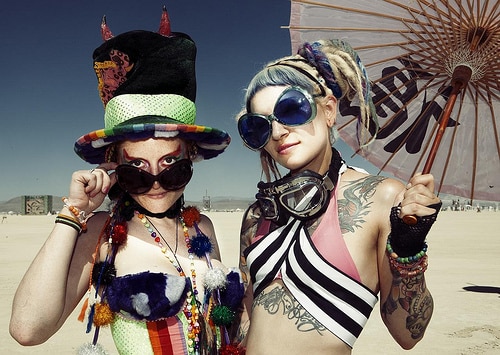 Aside from ice and coffee, there is no money exchanged. Everything is a gift. And that’s why this journey starts way before you get to the desert…

People spend all year preparing their gifts. This year I saw huge statues, A 90-foot yacht on wheels with a roving dance party, an entire french cafe bistro, a human car wash, several kissing booths, and the “bad idea theater.”   These are a few among thousands.

But the gifts don’t have to be so complex. Some people spend hours spraying a fine mist over the hot desert wanderers. Others give massages or hand out bacon. And it gets more random than that.  My first year I created the NOW watch, a watch with no ability to tell time, but simply had the word NOW with funky colors and a glitter gloss. I love experimenting with my own fascinations… I was blown away that you cannot even buy a watch that cannot tell time but just says NOW.  (There’s a good legal reason for that, which I eventually found out the hard way. It’s a long, sad story).

This year, I became obsessed with another item of contraband…

Did you know that it’s pretty much illegal to sell placebos?  There have been studies documenting how powerful an inert pill can be. They can even outperform anti-depressants. But go ahead and try to buy a placebo. You can’t!    But since Burning Man is a gift economy, I could create a placebo to give rather than sell.  And that’s what I did. I created the most powerful placebo I know… 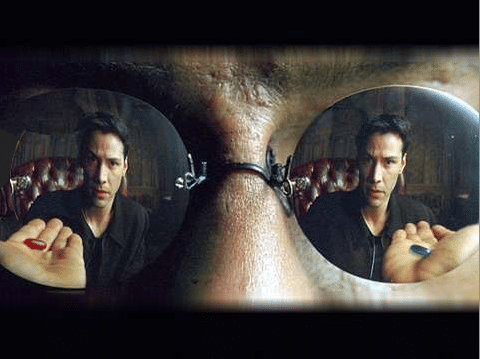 In the Matrix, Neo is offered the choice of the Red Pill or the Blue Pill.  Taking the red pill signifies the desire to see what is truly real. As Morpheus says, “I offer the truth, nothing more.” The blue pill allows Neo to go back to the Matrix, the falsely constructed reality.

So I created my own Red Pill… I ordered real pharmaceutical bottles, printed up labels, glossed them over with Mod Podge, and filled them with Red Tic Tacs.  Cute? Maybe. But that’s not what happens when you put the full intention on them and take them to Burning Man.

And it was more powerful than I imagined. But we’ll get to that later.  Let’s get back to the story….

As I said, all they provide are porta-potties, so you have to bring everything you could possibly need.  At a bare minimum that includes dust masks, goggles, gallons of water, food, shelter, etc.   I had planned to go with my girlfriend in an RV to her previous camp but we broke up two weeks before the event.  That’s another story for another time, but for those who know both of us, I’ll say that I’m a very lucky man to have been with such a radiant goddess for so long.

So I quickly had to find other arrangements.  While it’s possible to simply throw some stuff together and get out there, I don’t recommend it.  It could easily turn into “Harold and Kumar go to Burning Man.”  Luckily my friend, known as Princess Jedi had teamed up with a group of Google people called Suburbia and they welcomed us into their camp. We had a beautiful yard, picket fence, stove, couches and shade.  I consider it vital to have a good home there. Reality is so strange that one can easily feel completely alone.

This year I created an entire spreadsheet, with items, costumes, gifts, and camps to see. Color coding to show what I had, what I needed, and what was in progress.

We all have intentions. But some of us get really conscious about them. It’s easy to slip into the base desires – sex, drugs, adventure, etc. And there’s nothing wrong with that if it’s truly what you want. But often, we want something deeper that we think those things will bring us.

My intention was twofold:

1) Service – On my first trip I realized how fun it is to give. If you’ve got great gifts you can really light up people’s day.

2) Presence – It’s so easy to go into what they call “FOMO” Fear of Missing Out.  There’s so much going on that you often think, “I wonder what’s better than I could be doing?” And you start to worry that you’re missing something amazing.  But I find that when I imagine that where I am is the only place in existence, then time disappears and I feel connected to everyone and everything.

Getting there was relatively easy for me. I flew into Reno. PJ picked me up after she picked up all the food supplies, and we drove for 2 hours east.   We set up camp rather easily, but a storm was brewing.  I somehow had a vision of this before we left.

Just as we had our tents up it started to pour.  And then something ridiculous happened… 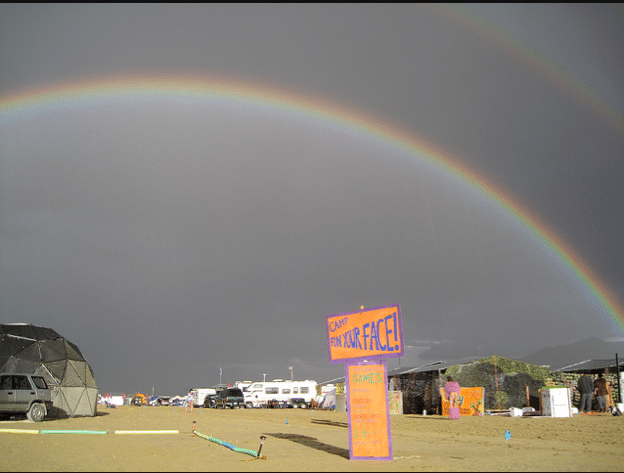 People all over jumped out and said, “Oh my God! Double rainbow, what does it mean???” If you don’t get the reference, you must watch this video, as well as this parody.

My first time I regretted that I had never gone deep into the desert, so this time it was the first thing I did.  And I found something amazing… It’s called the Starfuckers Oasis (a pun on Starbucks) and it’s a coffee shop oasis in the middle of nowhere, where they served us frozen lattes: 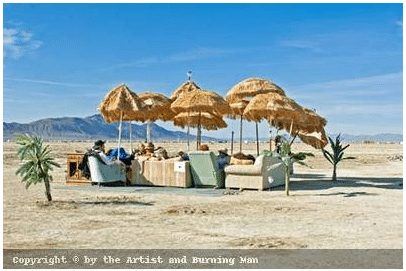 I had incredible conversations there for hours.

When I went to bed that night, I decided to take the red pill for myself.  I had to know it before I could give it to anyone else. When I woke up the next day, reality hit me very quickly…

All of the sudden I knew the real reason I was at Burning Man.

(to be continued in Part 2)