This is first time in years I returned to Zappos, this time for the Responsive Conference, perhaps the most cutting edge event on corporate culture that I know.  Here are a few things I learned, through the lens of my own interests (not at all a comprehensive review).

Gary V has predicted that mental health will become a big issue for businesses to solve. I think it’s both stress on the rise, as well as more people openly sharing their challenges.  David Hanrahan, VP of People and Places at Niantic, lead the session…

More ventures are developing apps to solve this (below). 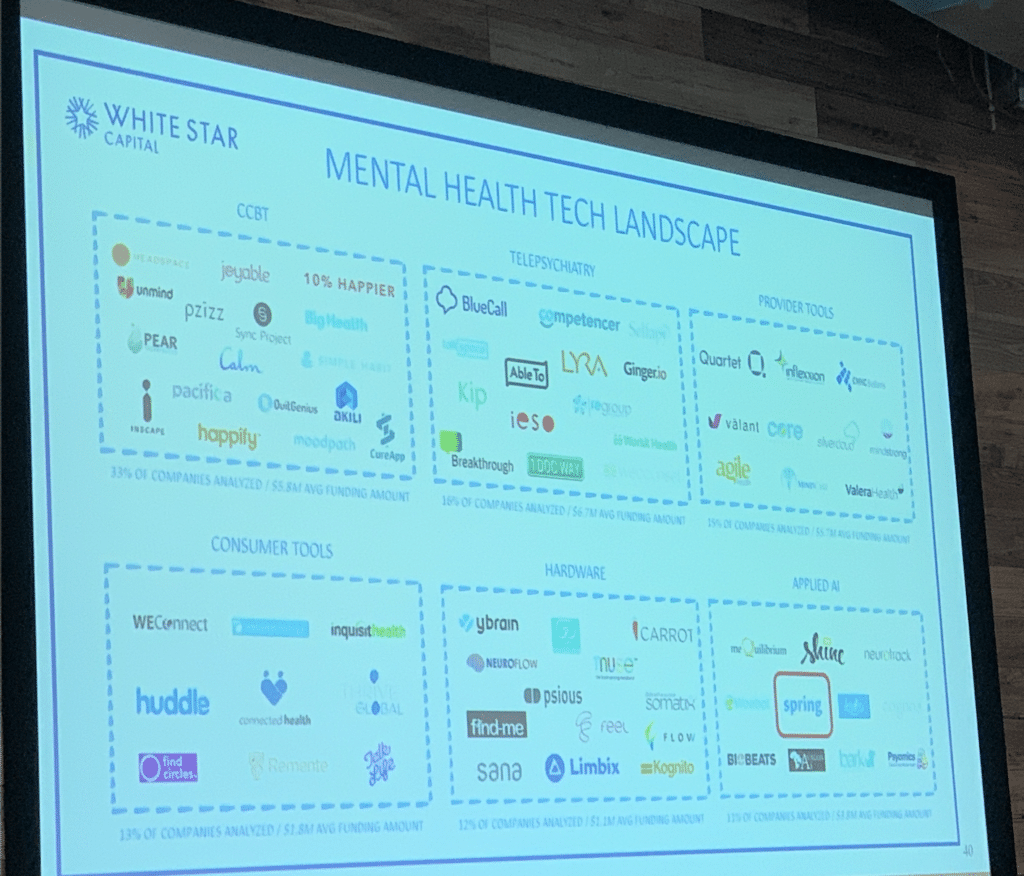 “The program – officially titled “r u ok?” – is an effort to end the stigma that surrounds mental health while connecting employees to existing resources within the organization. The program incorporates employee champions, cross-country presentations, virtual events, e-learning curriculums, peer-to-peer connections and follow-up services.

2. The Emotional Chemistry of the Workplace

Rajkumari Neogi of iRestart gave a brilliant keynote on emotions and how they effect us. We all want to belong, but she makes the point that fitting in is actually the opposite of belonging. In order to fit in, we have to play to the mold. But if we want to feel belonging, then we want acceptance for what makes us unique, and that means being vulnerable.

She showed how typical troublemakers are actually suffering: 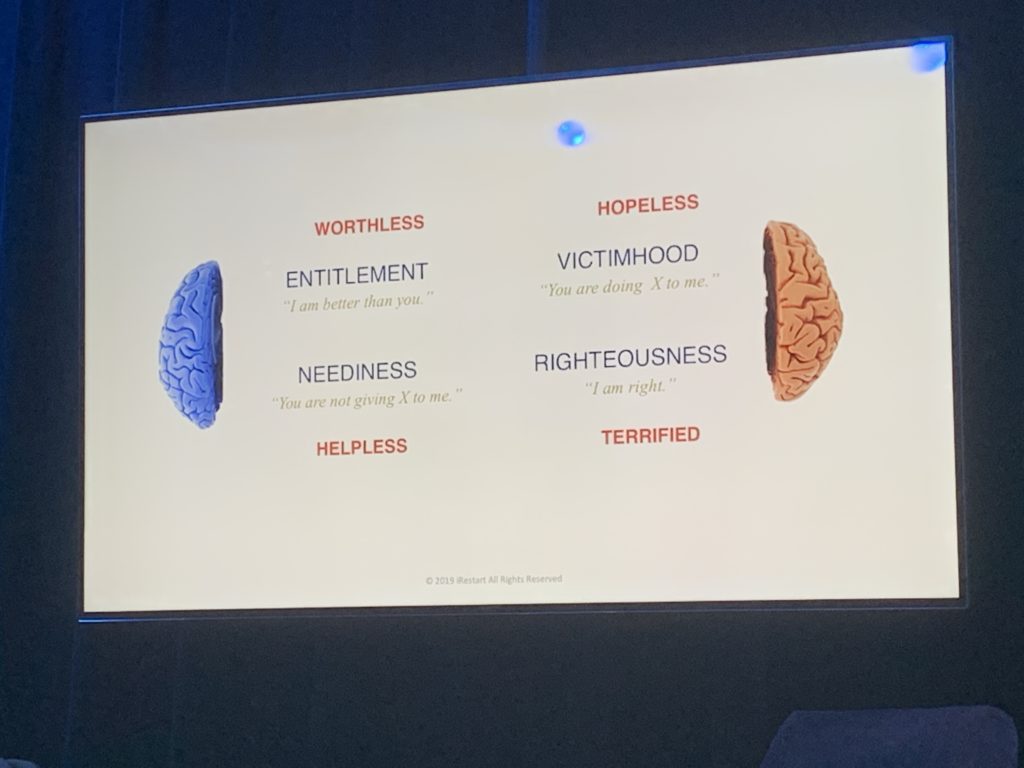 And I’m particularly fascinated by her breakdown of the brain chemistry of our emotions: 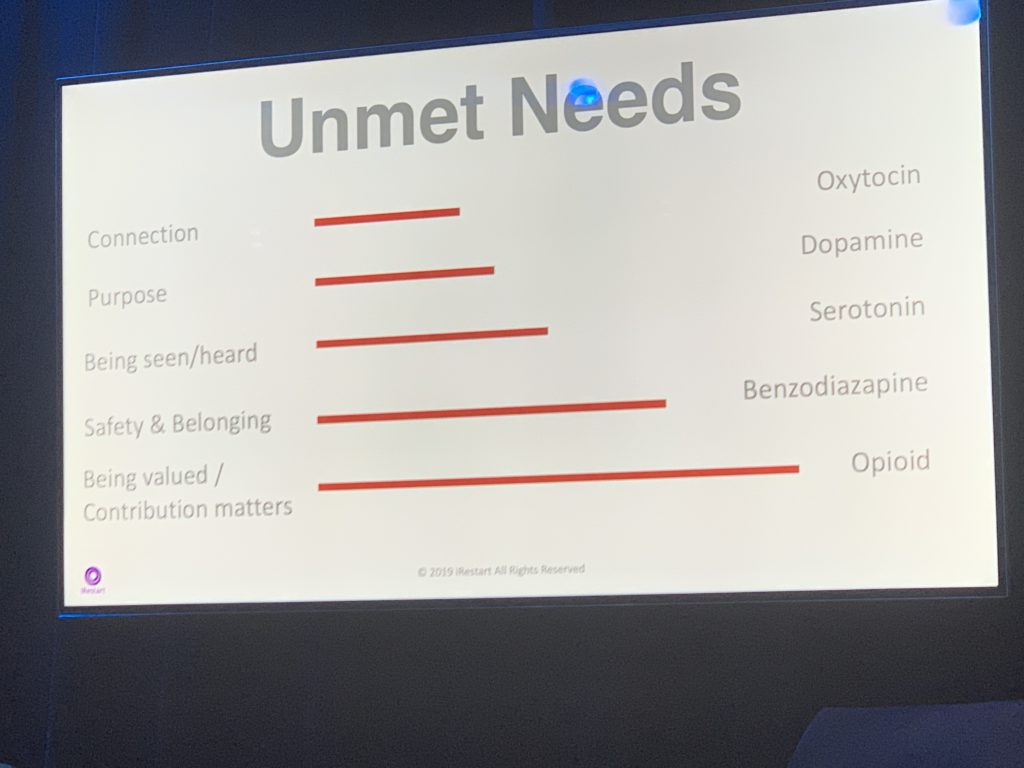 It makes me wonder what causes what.

I’m currently working on my own brain chemistry right now, and especially intrigued by how GABA plays a role. Neogi is very excited by this as well.  Having experimented with it in various forms, I believe the feeling GABA provides is one of feeling complete – in other words, the opposite of that feeling like we just can’t get enough done, and thinking about other things do to do, rather than being present.   I asked her about it and we decided to meet up and continue the conversation.

If there’s a way to address this behaviorally, then I would say it’s this next part.

I was so surprised to see Mike Williams wearing a Zappos badge.  Mike was the former COO for the David Allen Co (the author of Getting Things Done).

I met Mike several years ago at the Hacking Holacracy conference.  He said that Holacracy basically blew up the company — It went from a 40 person sales, training, coaching and community company to a 7 person licensing company. I thought this sounded like a horror story up until I heard Brian Roberston (Holacracy founder) explain what happened at this conference.  Through Holacracy they realized they’re world class at managing the brand and training trainers, so they licensed out everything else (such as sales) to those who are world class. Now they are reaching more people than ever.

For those of you who don’t me, GTD is like religion for me. It saves me from the chaos of my mind and all my ideas and tasks swirling all over the place. And I have often felt like the Prodigal Son, going far off the rails, only to come back and realize how powerful and peaceful this system is.  I think as we have more and more distractions and more opportunities, a system like GTD is going to be so important. At Zappos I used to train people on how to get their Inbox to zero everyday and it was a game changer when people really got it.

So Mike is a king in this space, and co-authored GTD for Teens, which may actually be the best entry point for adults since the new revised GTD book is so dense.  I was so happy to see Mike is now with Zappos, helping people get organized, and also offering it as a service to other companies through the Clarity program, which brings me to the next one… 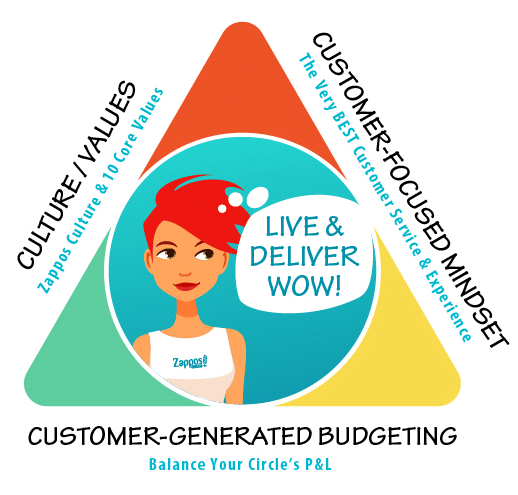 This is where it gets the most exciting for me. When Tony first invited me to Zappos, my mandate was turn a cost center into a profit center. The company spent a lot of money on giving away free tours, sharing business advice and sending out free culture books. All of this added up to at least half a million dollars in time and materials. We developed Zappos Insights from a content company to an experience company and by the time I left we were close to 8 figures in revenue.

Now Tony’s genius has extended to making every cost center into a profit center. Each department has a P&L that works both internally and externally. They buy and sell services – for example, a department needs HR’s services so that department has to pay for it, but it in turn can charge other departments like Audio/Video offers its services as well. And the system works externally as well. For example, A/V was contracted to shoot a commercial for Nike.

How cool is that?

I think it started with a frustration (or “tension”) about budgeting. In Holacracy it’s top down by circle. And one person in the group can deny a request. So it just takes one “no” to kill an idea. Now with this system, it just takes one “yes” from a department willing to fund it.

For more information, see the Evolve Program and especially the Glossary.

Everyone knows about evaluation tools like the Meyers Briggs, and DiSC, but what about one based on Oxytocin.  I was thrilled to see Doug Kirkpatrick there, who had a key role in Morningstar’s self-management program. He told me that they’re now focused on the “O Factor” from the book The Moral Molecule. It’s all about how trust is directly correlated with high oxytocin and the organizations that have higher oxytocin have more trust.  I was quite surprised to hear about this, and more surprised that Morningstar is leading the way.

15Five, the feedback company, has been using a system called the Gene Keys to help people find themselves, as well as paying for a ticket for any employee who wants to go to Burning Man for the first time.

Responsive 2020 will be at Zappos again. I highly recommend going.