Culture in the Campaign From a culture standpoint, there are remarkable similarities between the original Obama campaign and that of Trump.

Most of what we know about culture is actually artifacts of culture. They are the language, signs and symbols that resonate on such a deep emotional level that they shape our present and our future. As author Dave Logan said, “Hitler couldn’t even fire a gun and he took over most of Europe by the sheer power of his words.”

Take a look at the accompanying graphic to see how both Obama and Trump use slogan, symbols and status to rally their base, while the Clinton campaign struggles with the concepts. 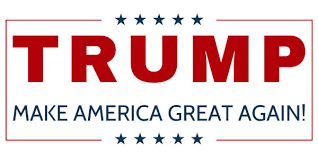 Notice how it tells a story by referencing a great past and promising a better future. The words inherently resonate with anyone who loves America but hates the status quo. 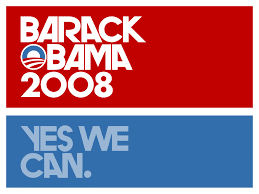 The phrase is almost hypnotic because it’s a positive word, combined with a community word and a word that means potential. It’s perfectly vague while emotionally bonding. (hat tip to Culture Game author Dan Mezick for noticing the NLP in this)

The phrase itself is from every campaign of the past three decades (Person-for-Branch of Government) so it’s automatically connected with the old and the status quo. And it has her name in it making it self-referential with no inherently positive words.

Brilliant because it’s an actual tangible item which makes it literally real. It’s like a crown he wears and everyone can buy one and wear one, like wearing the jersey of their favorite athlete. 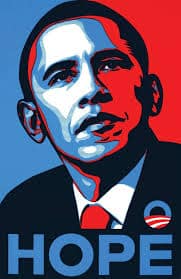 The striking image with the single positive word of Hope, brings back both the revolutionary spirit of a Che Guevara with the pride of the classic Kennedy campaign poster. 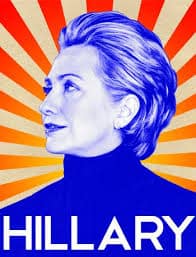 I can’t find an icon for Hillary except for this attempt at an iconic image to convey the modern woman with a sun behind her back.

America is upset with the government that seems to constantly either get the country in trouble or simply shut it down in a temper tantrum because they can’t get along.

People want an outsider, like Obama was in his first campaign. Trump has never been involved in politics, while Hillary has spent 24 years being guarded by the Secret Service.

If Hillary wins, I believe it will be swayed by those against Trump as opposed to for Hillary.

I think people are slowly beginning to realize that campaigns are not about policy and experience. There is something much more tribal that’s going on here. More on that soon.